Why Energy from Waste?

EnviRecover forms a key part of the waste management strategy for Herefordshire and Worcestershire, working alongside the other facilities within Severn Waste Services’ operations.  EnviRecover processes residual household waste from the two counties, this is waste which cannot be recycled or composted that would previously have been sent to landfill. Energy from Waste is considered an environmentally preferable option to landfill for waste management, allowing us to utilise the waste that cannot be recycled as a valuable resource instead.

An Energy from Waste Facility requires a much smaller footprint than a landfill site and new facilities are designed to avoid nuisance such as litter and odour. However, the main advantage of Energy from Waste is the production of electricity.

Waste vehicles offload into a large waste bunker. The waste is then mixed and loaded into a hopper using a crane. The hopper feeds the waste into the grate where it is combusted at temperatures above 850°c. This results in hot flue gases which are used to transfer heat to the boiler to generate steam. This steam then drives the turbine which produces electricity which is exported to the National Grid.

How we are regulated

The activities at EnviRecover are strictly regulated by EU legislation and require a permit to be in place. Our permit (EPR/XP3935TX) is issued and enforced by the Environment Agency.

The environmental permit contains detailed requirements on how we must operate to ensure prevention of harm to the environment and to human health. The permit is detailed and includes areas such as our permitted activities, operating techniques, emission limits, and requirements for monitoring, record keeping and reporting.

The gases from waste combustion are treated using lime, activated carbon and ammonia. The residues from this process are collected in filter bags before the treated emissions are released through the stack. These emissions are continually monitored and recorded to ensure that we are operating within the safe limits detailed in our permit. The graph below shows an overview of our average daily emissions for the previous month, as a percentage of the limit allowed. 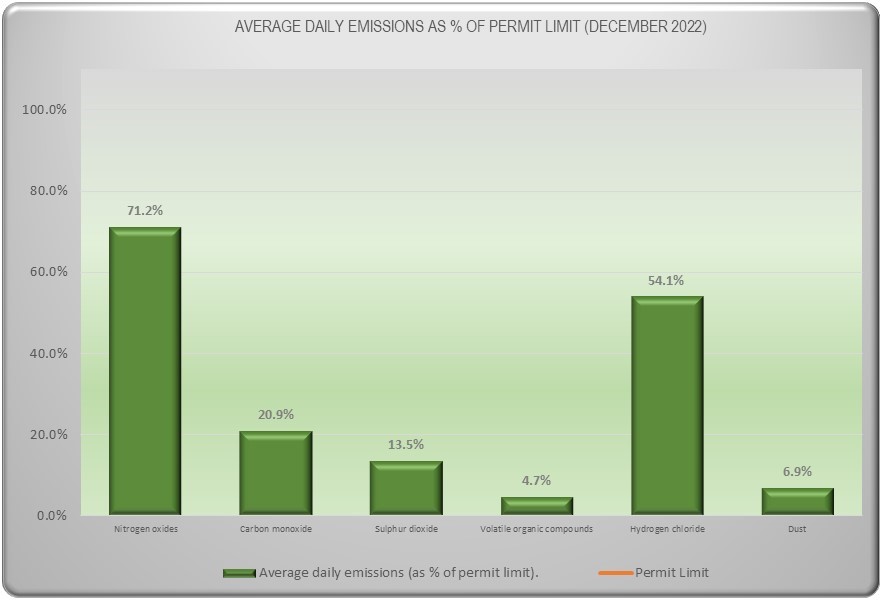 During the construction of our site, we followed a detailed Nature Conservation Plan and engaged with an Ecologist throughout the development. We are committed to ensuring that our activities do not adversely affect any species on our site and will continue to promote biodiversity by following our 25-year management plan. The site has 5 areas which have been used to create specific habitats for the wildlife identified in the area. These include the Great Crested Newt, Slow Worm, Grass Snake, Badger and various species of Bats. In addition, we have 2 attenuation ponds and a planting scheme followed throughout the site which aims to promote biodiversity.