Recovery - The process of Energy from waste (efW)

The EnviRecover process can be split into the following stages:

Residual waste is delivered to site in a variety of vehicles which pass over the weighbridge before being directed to the waste reception hall. Here the waste is discharged into a storage bunker. Overhead grab cranes then blend the waste to even out any variances in its calorific content. The same cranes then load the waste into a feed hopper, from where it is then fed onto the main combustion grate.

All combustion air is drawn from within the waste reception hall, which means that any odour arising from the waste is kept inside the plant.
EnviRecover also has a shredder which can be used to process any bulky waste which is delivered, to allow it to be blended in with the other waste effectively.

Once the waste has been loaded into the feed hopper it moves down the feed chute and onto the feed table. Feed rams then push the waste onto a combustion grate. The grate is comprised of rows of inclined bars that move the waste material through the combustion zones whilst aerating it to provide optimum combustion conditions.

During the boiler start-up sequence, the process will use auxiliary diesel burners to bring the furnace up to a minimum permitted operating temperature of 850°C. Once this temperature is achieved, waste can be loaded onto the grate and the process becomes self-sustaining. At this point the diesel burners are no longer needed.

The waste passes through four distinct combustion zones as it moves down the grate; drying, ignition, main combustion and burnout.

At the end of the grate the ash drops into an ash extractor. This contains a quench bath which cools the hot ash and acts as an air seal for the furnace. The extractor slowly moves the cool ash onto a series of conveyors which take the ash to another storage bunker. On the way, the ash passes under an overband magnet which separates any ferrous metals contained within the ash. It takes around four hours for a grab load of waste to move from the feed hopper, over the grate and into the ash bunker.

The ash is called Incinerator Bottom Ash (IBA) and this is then removed off site and taken to our Hill & Moor facility where it is stored, ready to be processed to enable the non-ferrous metal to be separated for recycling. We are working with a third party to see if the IBA can then be used in construction.

The metals which are separated are sent to be made into new products.  Metals can be recycled over and over again without losing their properties so they can be made into a variety of new products from staples and paperclips through to parts of cars.

The furnace walls surrounding the grate contain a series of pipes through which flowing water captures the energy from the heat, eventually turning it to steam which is used to drive the turbine.  The furnace walls are covered in thermal tiles that in addition to protecting the pipes, allow the efficient transfer of heat.

The steam then travels to the turbine hall where it drives the turbine. The turbine in turn then drives the generator which produces the electricity which we export to the National Grid.

EnviRecover utilises a conventional steam turbine to generate electricity.  The facility exports an average of 18MWh, which is enough to power approximately 32,000 homes.  The electricity that is produced is supplied to the National Grid, through a substation and transformers.

The flue gases from the combustion process are filtered and ‘scrubbed’ of particulates and potentially hazardous elements before being released to the atmosphere via the stack.   This is achieved by a number of control measures.  This includes; injecting a form of lime into the gas stream to reduce acidity, adding activated carbon to capture potential pollutants such as heavy metals and dioxins, injecting ammonia into the furnace to control oxides of nitrogen.

As the gases pass through the filters, particles and residues from the control measures are captured within them.  These work in a similar way to a vacuum cleaner bag.

The filters are designed so that they can be removed and replaced at intervals.  A pneumatic cleaning system is used to ensure the filters don’t become clogged. The dust removed by this process is then transported to a silo.  This material is known as Air Pollution Control residue (APCr).

The APCr is taken to a facility which uses a carbon negative process to recycle the material and create products from it.  The material can then be used to produce items such as breeze blocks.  You can find more information about this process here. 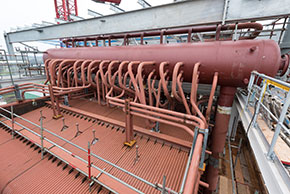 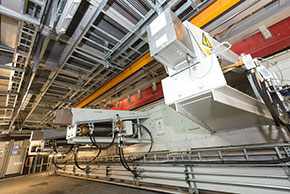 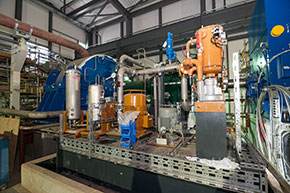 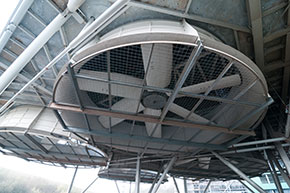